Sudden resignations tend to raise eyebrows, so when NPR reported the imminent departure of a major city clerk, the move garnered wide-eyed surprise. “Inez Brown has been Flint’s city clerk for 25 years. But at Wednesday night’s city council meeting, Brown announced she would be stepping down at the end of the month.”

On Sept. 6, two days before giving her three-week notice, the clerk and a who’s-who list of Flint officials received a demand letter. Either balance the city’s skewed number of election inspectors from 92% Democrat and 6% Republican to 50-50 or brace for legal filings stated the letter from Pure Integrity Michigan Elections and Attorney Erick Kaardal, Special Counsel for the Thomas More Society.

So, was the 25-year-veteran clerk’s resignation coincidence?

“I think not,” said Patrice Johnson, chair of PIME. “This is a huge win.”

Still, the clerk’s resignation raises questions as to how Flint will fill the vacancy. According to the NPR article, Flint has asked the Secretary of State to help with the approaching November elections.

“How is it that Flint could have such a weak bench that no underlings can fill a departing clerk’s shoes?” Johnson asked.

According to Michigan law, the conduct of the elections falls under the purview of county, township, or municipal clerks. The City of Flint is part of Flint Township, so asking for the township’s assistance is the next logical step. If not the township, then why not have Genesee County lend a hand?

Johnson, who hails from the corporate business world, explained that when a CEO departs in a rush, companies typically elevate an employee or contract outside leadership on a temporary basis. Turning the city’s elections over to the state seems too great a leap. “It’s equivalent to a large corporation handing the reins over to the Federal Trade Commission.”

If a person is running for office, the law states that person is prohibited from serving as an election inspector in the precinct in which he or she is running. It seems the same concept should apply for a secretary of state running for re-election.

The PIME/Thomas More Society Demand Letter stated in no uncertain terms, that “the City of Flint cease and desist spending taxpayer funds on its election inspector operations for the November 8, 2022, mid-term elections until it comes into legal compliance with the legally-required party balance for election inspectors in Flint. Michigan Compiled Laws § 168.674(2)” 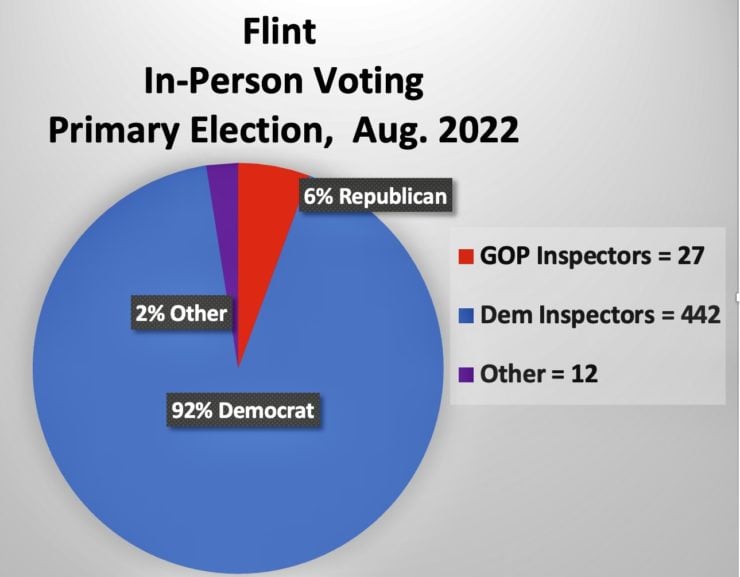 Now the question becomes whether Secretary of State Benson, who is up for re-election, can impartially administer an election.